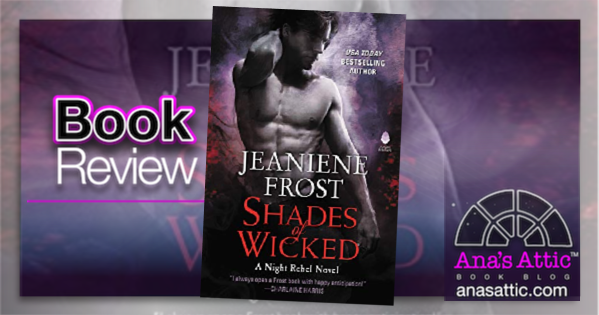 Paranormal Romance, first in a continuing spin-off series of the Night Huntress Series.

The Night Huntress Series by Jeaniene Frost was my favorite paranormal series back in 2009 when I was reading PNR, and Ian was the guy I couldn’t wait to read a book about. After being a little disappointed by Vlad’s books and the last Night Huntress book, I was a little nervous going into Shades of Wicked. Well, let me tell you, I had nothing to be worried about! Ian’s story lived up to all expectations. 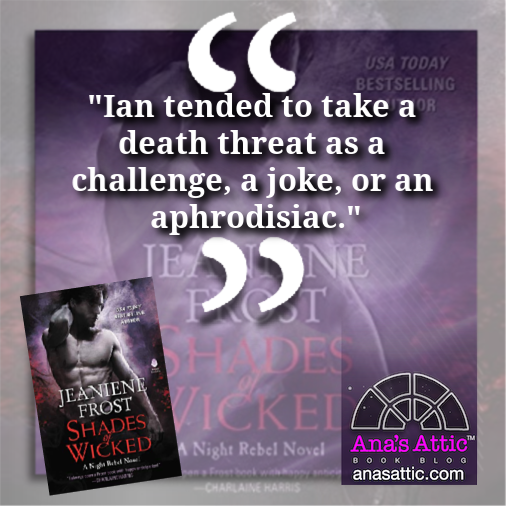 Since Shades of Wicked is the first in the new Night Rebel Series (expected to be 2-3 books), it can technically stand alone. Jeaniene Frost gives enough background for the newbies, but doesn’t bore the readers who have read the last dozen or so books. But readers of her Night Huntress Series have known Ian for years and you just can’t make up for that. I recommend starting with Halfway to the Grave. That being said, because I didn’t totally love the last three books, they didn’t really stick with me, and I only vaguely remember Veritas (perhaps because I just realized I did not read the last in Vlad’s series, which I will rectify this week). But my lack of memory took away nothing from the reading experience; I never felt like I missed anything.

“For a moment, I stared. What vampire in his right mind would pierce himself with silver there?”

Ian is a scoundrel, a flirt, a dirty dog, but he is so loyal to his friends that he sold his soul to save a friend (this took place prior to this book). Knowing that he has mere weeks left, he is living life to the fullest, which for him can mean anything.

Veritas is a Law Guardian who is thousands of years old to Ian’s mere hundreds. She is powerful, and she is after the same Demon who has Ian’s soul, and she plans on using him as bait. While Veritas is much older and more powerful than Ian, he has plenty of tricks up his sleeve, and these two make a great pair despite the antagonistic background between the two.

“Ian seemed as entertained by my threat to kill him as he’d been when he thought I was about to go down on him. He might be morally bankrupt, chronically dishonest, and inexplicably dangerous, but he was also . . . fun.”

There was the amazing banter you’d expect from Ian, there was TONS of action and adventure, lots of magic, and visits from all of our favorites. There was also some super hot vampires-breaking-a-house sex!

“No,” he said, the single word stunning me. “Not until you stop holding back.”
What? “I’m not holding back,” I began, only to have him fling me against the couch with such force, it sent me and the sofa sliding across the room. He stalked over when the wall finally stopped the couch.
“Liar. The only time you weren’t was when you tore my back up.” With each step, his voice deepened. “But after you apologized for that, you haven’t drawn my blood since. I won’t tolerate your half response. I want all of it, and if you keep holding back,” he leaned over, denying me the kiss I sought in favor of nearly yanking my legs open, “I’m going to torture you with pleasure until I break your control.”

They say opposites attract, right? Well these two were perfect for each other! She is the buttoned-up, forgot-how-to-have-fun law guardian and he is the degenerate scoundrel. I do wish I loved her a little more than I did in this, but she grew on me, and I can’t wait to read more about this unlikely pair. Be warned. Shades of Wicked ends on a cliffy, and Wicked Bite, the next in the series, doesn’t release until summer 2019.

“I saw the real you, and every time I did, I knew you were mine.” 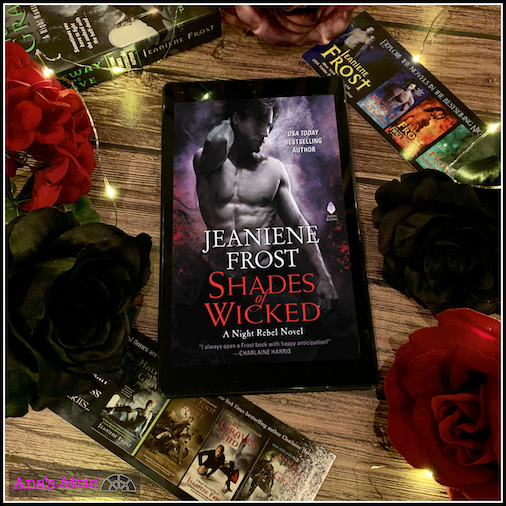 I didn’t remember how much I loved reading Jeaniene Frost until I read Shades of Wicked. After a steady diet of contemporary romance and romantic comedy, jumping back into the Night Huntress world was a total rush. So much happens! It’s so exciting and keeps you on the edge of your seat the whole time. Ian’s roguish, shameless ways are always great entertainment, the sex was awesome, the opposites-attract theme made for some great banter, and it absolutely left me wanting for more. Even though we have to wait until summer, it’s totally worth the wait. Reading Shades of Wicked made me want to get back into a little more suspense and paranormal, because I forgot how much fun it is to read. Luckily I just realized I missed Into The Fire, the last Night Prince book, so I grabbed it in audio and can’t wait to listen. 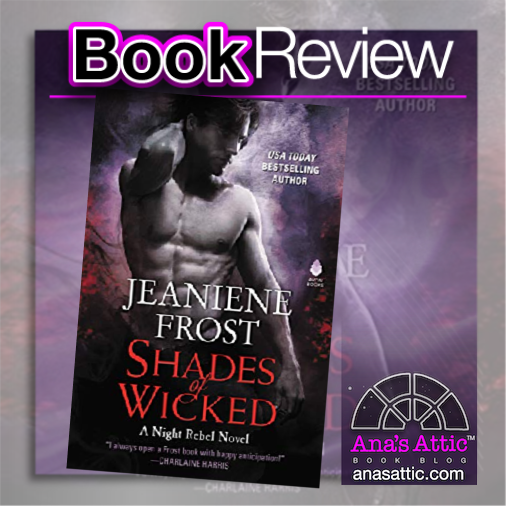