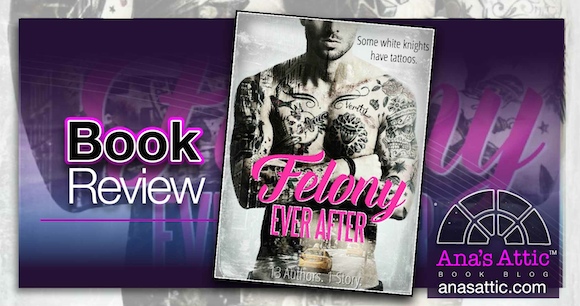 Felony Ever After: 13 Authors, 1 Story

13 authors, a few already on my favorite list, writing a book together? YES PLEASE. #BestIdeaEver  In my head though, I had some doubts. Some of the authors just didn’t fit! Such different styles! How would this work?

Well I am so happy to say, Felony Ever After worked brilliantly. I had a fantastic time reading this story! It flowed well. If I didn’t know it was written by 13 authors, I would never have guessed. The really fun thing was that it was completely unpredictable, because even the authors themselves didn’t know where it would go.

Verity Michaels tried to be a professional photographer in Florida, but when her business failed, she promised her father she would get a “real job” in New York City. So she finds herself as a receptionist working for a totally pervy boss who likes to ‘accidentally’ drop pencils and see her pick them up and who loves to work late.

Verity Michaels@VerityPics03
If my boss tries to see my cooch one more damn time, I’m putting hot sauce in his coffee.#EyesUpHere

On one of those late nights, she decides to take a cab home, and ends up sharing it with a very sexy, tattooed, criminal looking type of guy, Hudson Fenn. When the cab driver isn’t getting them home, Hudson makes sure they get there, in a not-so-legal way.

“I’ll have you know that I’m carrying a taser and have a throbbing, super contagious rash. Right now. In my pants.”

When she accuses Hudson of having gone to jail numerous times, he realizes she is a bit judgey.

“Because I have tattoos? You’re judging me on my ink?”
“Sometimes white knights have tattoos, princess.”

The use of tweets and hashtags at the end of each chapter was my favorite part of the book.

The next Monday, her weird (but good looking) boss Larold Lay, is desperately waiting for a package. And guess who the bike messenger who brings it is? Yup, Hudson, the guy she has been fantasizing about all weekend. But the real question is #Whatsinthebox

The banter between Hudson and Verity was awesome.

“You just seem…dangerous–like someone I should stay away from.”
“Dangerous,” he repeated. “Okay, so you do like me, but that scares you because I’m different than the straight-laced guys you’re used to.”
“Don’t put words in my mouth.”
“Would you prefer something else?”

Then they even begin to banter via twitter, and I loved it! But Hudson is an enigma. He’s smart, has great manners, lives in a fancy apartment, yet he’s a bike messenger who looks like a felon. And he has a secret room at his place.

“If you tell me that room I can’t go into at your place is a Red Room of Pain, we’re going to need to stop to buy lube and some Fifty Shades wine.”

He is so sweet, sexy and funny that Verity can’t help but fall for him. Even though she still thinks he is a felon.

And after the first date:

The real mystery of the book however, is WHAT IS IN ALL THE BOXES that her boss is so eager for and secretive about? The funny thing is, the authors didn’t know either! When it finally is revealed, it is even better than I imagined. You can bet I will be buying the next book that author writes because I like the way her mind works! In fact, I liked the way they all worked!

I had such a fun time reading Felony Ever After! 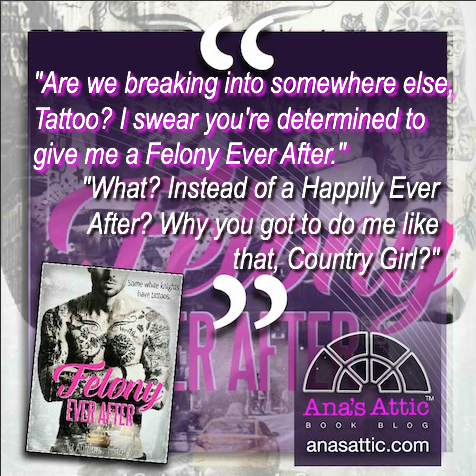 I absolutely loved Felony Ever After. I think it is one of my favorites so far this year. From the concept of 13 authors writing it together like a domino game, to the banter, to the mystery, to the romance, to the tweets & hashtags, to the sexy times, it was everything I love. Sure, it got a little silly at times, but with Helena Hunting and Debra Anastasia, I knew what I was in for and loved every second of it. If I were an author, I’d love to be part of writing this, because as a reader it seemed like they had a great time with it. I so hope they do it again!

Purchase Felony Ever After