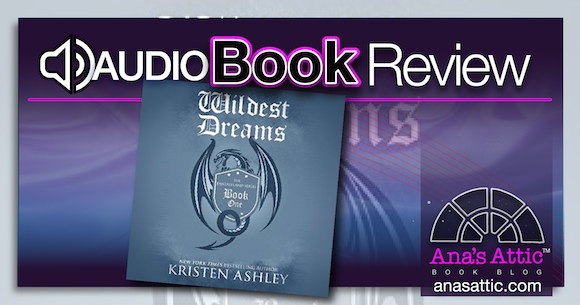 1st in a series of Fantasy Standalones

I do a lot of Kristen Ashley re-reads via audible. So far every one is just as good via audible as it is reading it. For some reason though, I thought I would have more trouble with the fantasy books via audible. I was SO WRONG. I loved Wildest Dreams via audible,  ($1.99 audio upgrade) perhaps even more than the original. Though I don’t normally post a second review, I feel I must because I know how many people are still reluctant to read this series because they don’t read fantasy or paranormal. It won’t matter. It’s Kristen Ashley, and her magic works for any genre.

I am going to post my original review of the Kindle book and just add my 5 star audible rating below. While sometimes I feel like you should read the book more than or before listening to it, I feel like listening is just as good as reading it in this case. 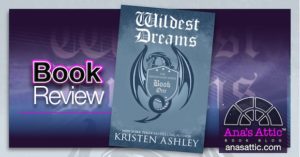 I’ve been saving this series for a rainy day. A day that I was in a book funk and needed something totally different. To be honest, I was a little scared to read Wildest Dreams. Fantasy is not my genre. But it’s Kristen Ashley, and I’ve heard how great the series is, whether you read fantasy or not. But I totally didn’t expect it to be better than my wildest dreams! (See what I did there?) And it was. What a testament to Kristen Ashley’s talent that she can deliver an amazing KA book in a totally different world. The talent it takes to build a world completely different than ours and suck you right into it is crazy.

I’m not sure I have ever felt this strongly after a book that is a standalone (though the rest take place in the same world). I wanted to go back into this world so badly! I planned on just reading one, because Kristen Ashley books are long, and I literally get NOTHING done while reading one. I planned to wait to read another after Wicked Book Weekend in April. HA! But I was dreaming about the books. I was reading other books that I was truly enjoying, but still just wanted them to end so I could go back to Fantasyland! I couldn’t even sit down to write this review until I was back in that world. I needed another fix! I’m actually writing this after reading Golden Dynasty, and like every KA series, this one just gets better!

OK, so here is the premise of the Fantasyland series: It takes place in modern day. But there is another dimension–an parallel universe, where pretty much everyone here has a twin. But this place is different. There is magic. Elves and witches exist, people can understand animals, but there is no electricity or cars or phones or running water. But there are kick-ass clothes, gorgeous castles, princesses, princes, hot as fuck warriors, and the men are MEN (well most of them) and there are dragons!

The whole series is just one romantic, exciting adventure.

“Life was meant to be lived, every breath was a gift, every risk worth taking.”

Seoafin “Finnie” Wilde learned from a young age to grab adventure. She is an adrenaline junkie, always up for the next thrill. Her parents taught her that, but they unfortunately died in a plane crash when she was 15. Leaving her lots of money, she heard of a way that she thought she could see her parents again by paying a witch to switch places with her twin in the parallel universe for one year. Her twin in Lunwyn agreed to the switch, they informed each other of the important details via letters through the witch. But the twin in Fantasyland left out many of the details of the life Finnie would be walking into.

Like the fact that Finnie would be a princess and arrive just 15 minutes before her arranged marriage to the brutal but gorgeous Frey Drakaar, leader of the elves and dragons. And the Drakaar hates the beautiful princess because he is being forced into marriage with her though it’s known far and wide that she’s a lesbian! Not only that, but they must produce an heir to the throne which means dangerous enemies as well.

Here is where I must talk about Kristen Ashley’s world. We know her talent for description in her contemporary books. They are even stronger here. The world that Finnie is Princess of is a beautiful winter wonderland. The castle has all of the things castles have. The finest silks, and 4 handmaidens who attend to the princess’s every need. So she is thrust into a world where she is a princess dressing for her wedding. You can imagine Kristen Ashley’s lush descriptions of the dress and castle. I was easily and immediately sucked in and transported with Finnie.

Despite their really rocky start, it was clear that The Drakaar and Finnie were meant for each other. And I loved seeing the tough pirate warrior’s sweet mushy center.

“So here I was, a princess in a frozen world with a very scary yet very hot husband who could really kiss and liked to cuddle.”

I don’t even want to discuss any more of the story (I only introduced you to the first few pages!) because I want you to experience it yourself, to be transported like I was.

But a few things about the characters. I loved Finnie! She was a bit immature, but the childlike glee she had where everything was “cool” was fun. She was scrappy, adventurous, tough and a perfect KA heroine. Frey Drakaar was a typical KA alphahole with a soft, protective sweet side. Though he did a couple of things that were wrong no matter what world you were in that made me have a little bit of a harder time with him, he was still totally swoony. I mean he was basically the strongest man in the world. The only one who could talk to elves and command dragons.

As always with Kristen Ashley, the adventure is secondary to the romance, but there was a lot of both.

“You are, my wee Finnie, beyond my wildest dreams.” 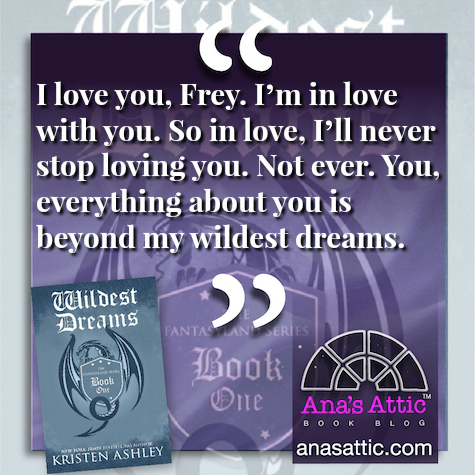 “My handsome husband tasted of peanut butter and marshmallow fluff. Kiss number three in the lineup of our best kisses. Kisses, all of them, better than anything… absolutely anything… even my wildest dreams.”

Wildest Dreams was still very much a Kristen Ashley book. I expected it to be a little more “otherworldly” but it wasn’t. it was a nice and easy transition into the fantasy world, so I think it would be easy for any fan of her contemporary books to get into this series. I have never felt such a crushing need to go back for more right after I finish a book. I honestly rushed through the other books I committed to, blew off work and had to get to Golden Dynasty right away, and it was even better. Filled with adventure, romance, palaces, wars, executions, kidnappings and even more romance, I’m telling you, if you are a fan of Kristen Ashley, I don’t care if you have never read a fantasy or paranormal book before, you need to try this series. You won’t regret it.

Fantastical, Broken Dove and Midnight Soul all release on Audible 10/25. Pre-orders are available. 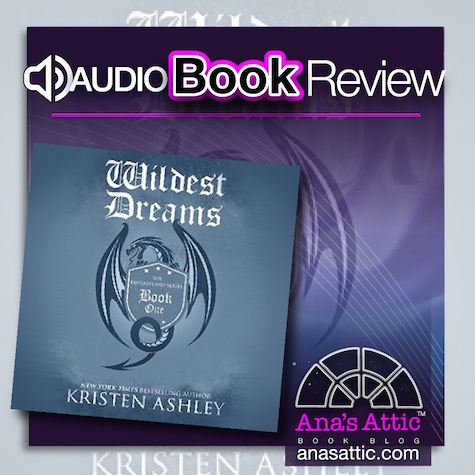