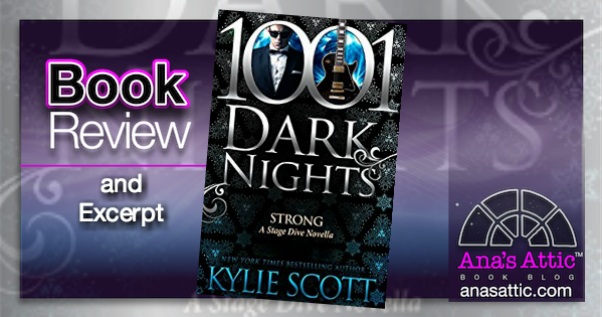 It was so much fun visiting with the boys from Stage Dive again! Especially Mal, my all-time favorite book boyfriend. I totally bought Play in audio after reading Strong because I needed more Mal and it’s been years since I enjoyed his antics.

I read Lick by Kylie Scott over 5 years ago. And while I still remember the main couple of the book, I don’t usually remember side characters, even ones that caused trouble. I vaguely remember Martha from Deep, trying to cause problems for her brother, but only because I was reminded by a friend who was concerned about reading Strong because of her hatred toward the heroine. For me and my crappy memory, I went in with no preconceived notions at all. 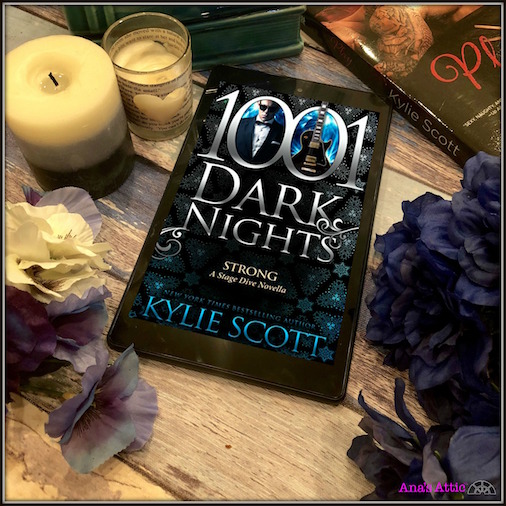 The 1001 Nights books are supposed to be standalone books that are bonuses for fans but introduce new readers to a series as well. The few I have read stand alone for the most part, but you know you are missing something, and I felt that here in Strong. I didn’t remember all that Martha had to atone for and it was brought up often. That being said, I still loved the standalone romance part, and the visit with the entire band family.

“When the girl of your dreams is kind of a nightmare.”

Martha is Ben the bass player’s sister and David the guitar player’s ex. Though I didn’t really remember her, I never totally warmed up to her in Strong, so if I had remembered her and hated her like so many do, I may have had a harder time warming up than I did. But as it was, for me, she was OK, I didn’t dislike her, I just found her kind of prickly.

“You do enjoy a good tantrum from time to time. But I rather enjoy your sharp edges. Keeps me on my toes.”

Sam, the Stage Dive bodyguard, has been interested in Martha for years, and she has been attracted to him as well. Now that she is back in town taking care of her brother’s child and atoning for her past behavior, Sam ramps up his flirt, and Martha is into the older man who is totally the opposite of her regular type.

“He made me wish I knew anatomy better. So I could put a name to all of the bumps and bulges in his shoulders and arms.”

But she wouldn’t admit her desire, not even to herself.

“My heart did not speed up due to anything done by him. Clearly, I hadn’t totally caught my breath from when we’d walked in half an hour ago or something.”

Sam was such an awesome teddy bear of a man, but he never came across as weak.

“Considering I’ve been waiting for you for almost a decade, I think I’ve got a pretty good understanding of what goes on in that gorgeous head of yours.”

I loved how into her he was and how he wasn’t afraid to show it. 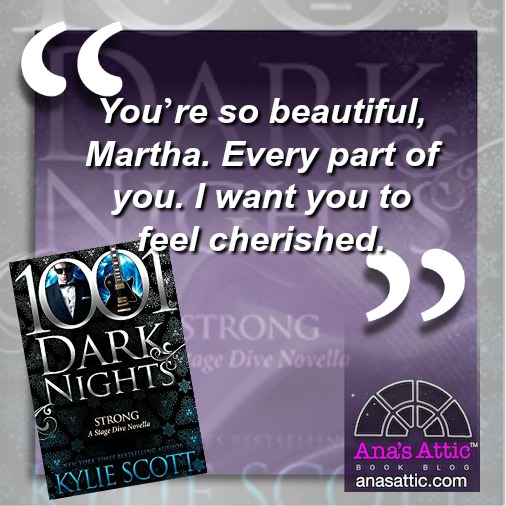 But Martha was reluctant to give in for more than just sex.

“Things were happening too fast. All I’d wanted was to crawl all over him and use him as my very own personal sex toy.”

Can Sam win over even the most reluctant for love?

Strong by Kylie Scott was a wonderful visit with one of my favorite book bands. Just visiting with Mal a little would have been worth it, but Kylie Scott delivered a story of redemption and love. I didn’t totally warm up to Martha, but I liked her with the big softy, Sam. I do wish I remembered a few more details from the original series, but had no problem following and enjoying the main story arc for Strong, and perhaps remembering the details would have pulled me even further from liking Martha. If you are a fan of the Stage Dive Series, I think this was a great little visit with them, and hopefully an introduction to a new Rock Star romance.

“I don’t believe this,” I bitched. “My Valentino boots are actually sticking to the floor. That’s how gross this place is.”Lizzy just smiled. “Told you to dress casual.”

“Jeans and a tee is casual.”

“A tee? It’s velvet, Martha.” She held a bottle of beer up to her lips, taking a sip. “I said we were going to a dive bar. You have only yourself to blame for the fashion faux pas.”

“Would you two quit talking? I’m trying to listen,” said my brother, Ben. The big hairy idiot was slouched back in his chair, bopping his head in time to the music.

Lizzy shuffled closer all conspiratorial-like. “I know why you’re all dressed up.”

I said nothing. There was nothing to be said.

Next her gaze went to the man standing at the end of the bar across from us. No, no, I would not turn my head. I would not fall prey to her bullshit. After all, I’d managed to successfully avoid him for the forty-eight or so hours since my not so triumphant surprise return to the West Coast. Even with us both being in the same house. A very big sprawling house, but still.

On the other hand, it should probably be mentioned that he looked awfully good tonight in jeans and a white T-shirt with a leather jacket. Samuel Rhodes, otherwise known as Sam. Not a pretty man with his harsh features and bull-like neck, but something about him appealed to me. As always, his head was shaved and his body was built and my idiot fingers itched to explore.

Okay. So I guess at some point I must have turned my head. And shit, he caught me looking.

The corner of his lips rose just a little, just enough to mess with me, before he returned to doing his job by casually surveying the packed room. My heart did not speed up due to anything done by him. Clearly, I hadn’t totally caught my breath from when we’d walked in half an hour ago or something. That was all. Interesting to note, he did none of the checking me out typical of a heterosexual male who might have been into me. In fact, he didn’t really give me any signals at all. Ever.

Kylie is a New York Times and USA Today best-selling author. She was voted Australian Romance Writer of the year, 2013 & 2014, by the Australian Romance Writer’s Association and her books have been translated into eleven different languages. She is a long time fan of romance, rock music, and B-grade horror films. Based in Queensland, Australia with her two children and husband, she reads, writes and never dithers around on the internet. You can learn more about Kylie from http://www.kylie-scott.com/ 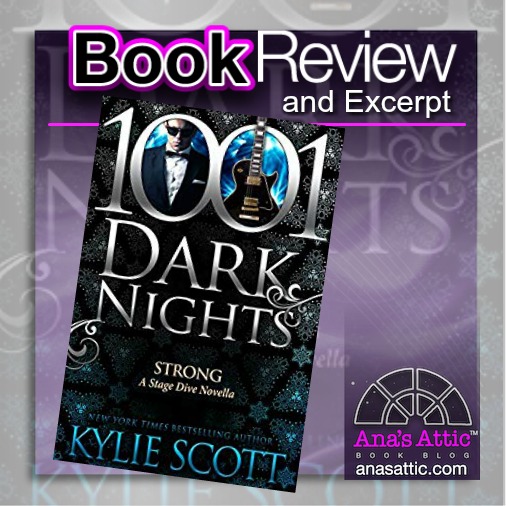