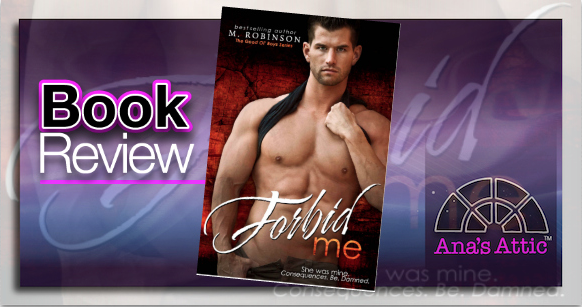 Angsty, Sexy, Fun, Forbidden, Alpha, Yummy. Forbid Me by M. Robinson was all of those things. Forbid Me is, according to the author, a full standalone. But the whole “Good ol’ boys” crew was introduced in Complicate Me, and I think that Forbid me would have been a million times better if I had read that first. Don’t get me wrong…I absolutely LOVED Jacob and Lily’s story, but I found myself confused with the rest of the characters and I did feel like I missed something, because I couldn’t keep the other characters straight.

Lucas is the star of the first book, and his best friend and little sister Jacob and Lillian are the stars of the second.  Jacob was 7 years older than Lily, and was there when she was born. He grew up with her as a close family friend, and almost a second brother when she is younger, naming her ‘Kid’. Their relationship starts out so innocently. She has a crush, but he knows he is too old to feel the same, though there is a strange pull between them. But when you’re 15 or 16, 23 is a HUGE, illegal gap.

It was instinctual. It was wrong. She was fifteen fucking years old. Then why did it feel… So. Fucking. Right. This is so wrong. I’m going to hell. Fuck me.”

These two are meant for each other. Even at 15 it didn’t feel sordid, it just felt right, but Jacob knew he had to fight it. Sometimes though, he couldn’t help letting his love spill out. So much so that he had to push her far, far away. Forbid Me is told in alternating past and present, and I didn’t ever have a problem with the time jumps, they were all very smooth and I always knew where I was. 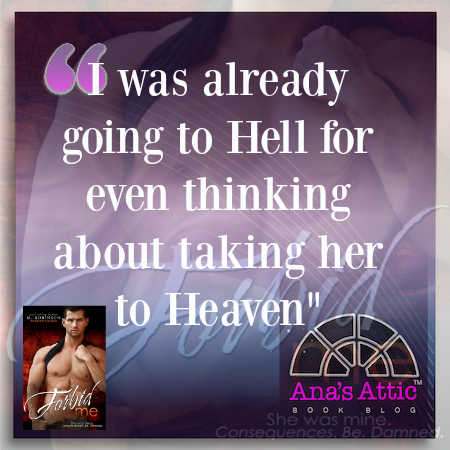 Apparently in the first book, Jacob was completely against Lucas and Alex getting together, yet here he was, into Lucas’s little baby sister. But Lucas is a life-long best friend and would absolutely KILL him if he knew. In fact, the judgment of all their friends and family will be rough to get past.

Lily is feisty and strong and has absolutely no doubt of her love, and she knows he feels the same. I loved her sense of humor, her playfulness, and her never doubting her feelings. And though I wanted to punch Jacob a few times, you never really doubted his feelings either.

I was blinded by her. Consumed by her. Wrecked by her. She owned each and every part of me, right down to my soul.”

Let me tell you about Jacob. HOLY ALPHA HOTNESS!

I will reward you with burying my face into your sweet pussy and make you come down my beard.”
“Jacob…”
“Say it Lillian…”

Forbid Me by M. Robinson was my first book by her, but it won’t be my last! I love her writing. It was the perfect blend of life-long love, angst, heartbreak, romance, forbidden love, and hot dominant sex. I loved the characters, but I do wish I read Complicate Me first because I found myself having trouble keeping the side characters straight. Forbid Me is considered a stand alone, and can absolutely be read as one, but I think it would have been so much better if I read the first one and fell in love with the whole group of friends.

Purchase Forbid Me by M. Robinson 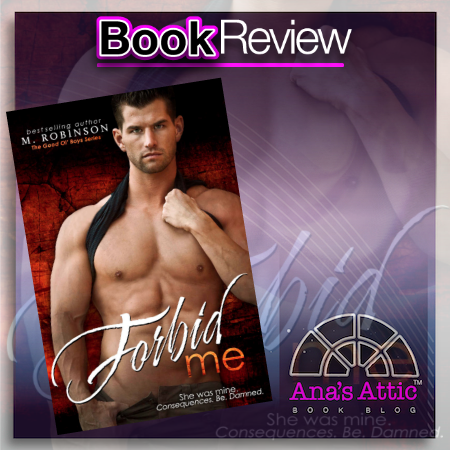