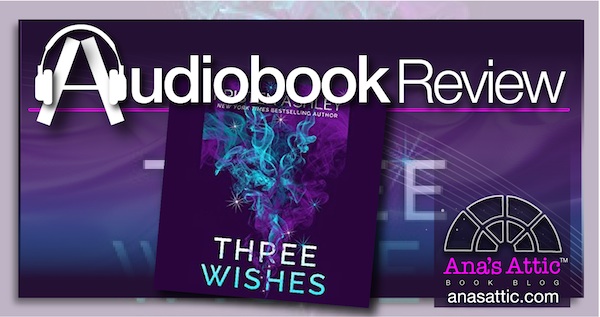 Wow. That feeling when a standout  book you just loved is over. I listened to Three Wishes as I built my bookcases, spending hours filling holes and sanding and painting while I listened to this epic, memorable Kristen Ashley gem. It’s no secret that Kristen Ashley is my favorite author. I have deliberately left a few of her books for rainy days, or days when I need to get out of a slump or read something different. Three Wishes is one of those books. Published in 2011, this standalone kind of gave me the feeling of a historical novel (which I normally don’t love) because it did start off as one, plus it was written in 3rd person (which I also normally don’t love) – but it totally worked for this book. I literally sat on the floor with headphones still in my ears and staring off into space for a good 45 minutes when it ended, just letting it all sink in. And for the first time, I couldn’t start another audiobook for a day or two.

Taking place over three generations, Fazire, the family genie, was passed from mother to daughter. Most people wish their 3 wishes and move on, but this family was special. They didn’t use the wishes, they passed them down to their children. Until one desperately wanted kids and couldn’t conceive…

“He made her bright and funny and very, very talented.
He made her sweet and thoughtful and very, very caring.
He made her generous and kind and very, very loving.
He decided not to make her beautiful, at least not at first, because she should know humility and not grow up with conceit.
Though, she would become a beauty, a splendid beauty beyond compare.
Just . . . later.”

But Fazire did not grow up human. It never occurred to him that before she turned beautiful, the chubby, super-smart girl would bare the brunt of bullies and mean kids. She was miserable, losing herself in romance novel after romance novel. Until at 14, after being teased at school, Lily makes her own wish. A really long, really detailed wish. 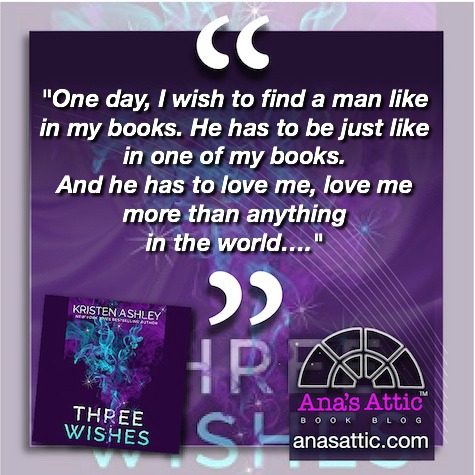 She went on to describe his many qualities. At 14, she didn’t realize that romance novels are much easier to read than experience…

“We have to go through some trials and tribulations.
Something to test our love, make it strong
and worthy. And… and… he has to be daring and
very masculine. Powerful. People must respect
him, maybe even fear him….”

When her wish started to come true, it was beautiful… Meeting Nate, who was so broken, yet strong and alpha, just like she wanted.

“Whatever you want, just ask and I’ll get it for you. You’ll never need for anything, want for anything, not while you’re with me. I’ll take care of everything.”

But those trials and tribulations happened, and are way more than any couple should go through.

“You told me you’d never let me go,” she whispered but it was an accusation.
His eyes closed and the pain in them swept over his entire face and settled there like it would never, ever leave. Then he shocked her again. He dropped his forehead to hers and kept his hands on her. Something out of her control made her continue. “You told me,” she said in a shaky voice, “you’d always take care of me.”

Oh the emotions that this book put me through! I loved every second of listening to this oh-so-memorable book. At fifteen and a half hours, there was more than enough time to fall for all the characters and never feel like it happened too fast. It was a well developed story that never dragged, not for a second. I say this after so many of Kristen Ashley’s books, but were it not for 1-2 things that really upset me about Nate, this would have been one of my favorite KA books (well, it still is—I am just having a hard time giving 5 stars to a book that has any dislikes, but it was still a favorite, so I think I have to give the 5 stars anyway).

Though I rarely choose books based on the narrator, I immediately looked to see what else Carly Robins has narrated. She was excellent, and I think her narration enhanced the book. It made me glad I listened to this the first time.

Even if you think genies sounds like something you’d never be into, trust Kristen Ashley. The woman can craft a story like no other no matter what the genre or subject. Three Wishes had everything I love in a Kristen Ashley story, and even though there were a few things Nate did that I found tough to forgive, I still loved every word. I do think that having the genie aspect made this book a little more unforgettable than many other books, and I think it would be great if she writes another with a genie. Just like with her Fantasyland Series, Three Wishes is so worth leaving your comfort zone for, because it just may become a favorite for you too. 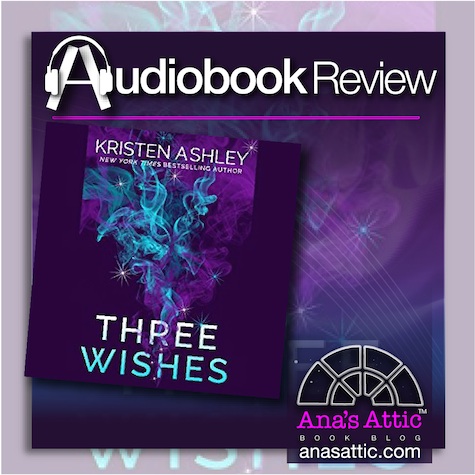